Hello and thank you for taking a few minutes to learn more about your police department here in Londonderry.

To say that we are proud to serve our community and those who visit is an understatement.  These are not just words, but a mantra instilled in us since Chief Joseph E. Ryan took the helm in 1996.  He began a tradition of fiscal prudence, department pride, and most importantly community partnerships.  He made sure to instill these values in his command staff and in his succession planning.  He could not have passed on the agency and these values to anyone better than he did when William Ryan Hart. Jr. became Chief of Police in 2011.

Bill modernized the agency through technology, professional accreditation, and by building a regional reputation of excellence built on our motto, “Expect Excellence.”  We know that YOU, our citizenry and business community, expect excellence in everything we do.  We do our best day in and day out to attract the best employees we can, both civilian and sworn.  For decades we have been considered a destination law enforcement agency within New Hampshire and New England, which is why we attract so many certified officers from others agencies.  This does not happen by chance.  It happens because of the culture we and those before us have built over many years. It is a reputation for excellence, honesty, transparency, and of caring.

We care about everything we do, from the smallest, most mundane task to the most complicated and critical services we provide in emergency times.  My pledge as your newly appointed Chief of Police is to continue with the same Pride, Spirit, and Tradition that chiefs before me have instilled not only in the staff here at LPD but also within the community.  Without your emotional and philosophical support, we cannot succeed.  It would be impossible.  We know that we are supported by our community each and every day, which is why, in part, we attract and retain only the best police officers and civilian staff.  Without your support and trust, we could not do our jobs.

In closing, I look forward to the challenges we will face together to keep our community one of the safest in the region, and to the partnerships, we will continue to build.  My door is always open; my phone is always on. 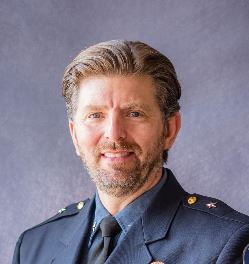