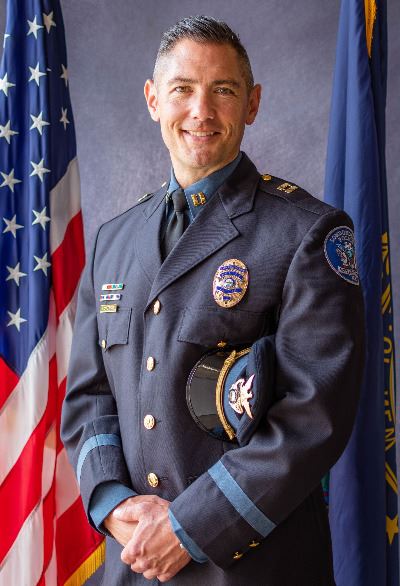 Captain Patrick Cheetham began his law enforcement career as a part-time dispatcher with the Hillsborough County Sheriff’s Office (2000-2002) and as a part-time officer in neighboring Litchfield, NH for a brief stint from (2001-2002).  He joined the LPD full-time in August of 2002 and graduated from the 129th Session of the NH Police Academy in November of that year.

While in uniformed patrol, he served as a mountain bike officer, field training officer, and physical fitness testing officer.  In 2007, Chief Joseph Ryan selected then Officer Cheetham to attend the very first session of the New England Polygraph Institute, where he graduated first in his class academically.  Officer Cheetham was promoted to Detective in 2008 by Chief William Ryan Hart Jr., who would later promote him to Sergeant (2010), Detective Sergeant (2015), Lieutenant (2016), and currently Captain of the Services Division (2018-present).

Captain Cheetham served as a crisis negotiator on the Southern NH Special Operations Unit from 2007-2017 and also as the 2nd-Vice President of the New England Crisis Negotiators Association during that time.  He was a founding member of the NH Association of Police Polygraph and served as its Secretary for several years.  He also held several positions within the NH Police Association, the state’s largest and oldest association of police officers, culminating in his service as its President from 2017-2018.

He holds a Bachelor of Arts in Criminal Justice from Saint Anselm College, a Master’s of Business Administration and also a Master’s of Science in Justice Studies, both from Southern New Hampshire University.  Captain Cheetham teaches several online courses for SNHU annually and has served as a bagpiper with the NH Police Association Pipes and Drums since 2005, having also served as its Vice-President and President for several terms over his 17+ years of membership in the band.

Captain Cheetham was selected in 2021 as one of the Union Leader’s “40 Under Forty” in recognition of his service and volunteerism, both civic and professional, to the State of New Hampshire. A little unknown fact outside of the LPD...Captain Cheetham was a police explorer with LPD from 1997-1999 and is one of two former police explorers to join the ranks of the LPD, the other being retired K9 Officer Mark Page.

Most importantly, Captain Cheetham is the proud father to his 4-year-old son and 6-year-old daughter.