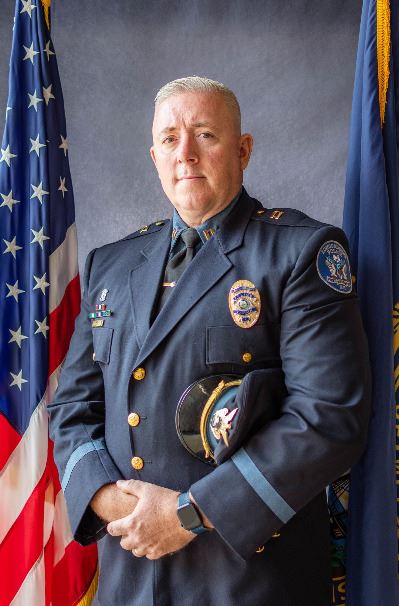 Captain Morrison has been a full-time certified Officer since 1999.  Captain Morrison has served in every division at LPD and was a Crisis Negotiator for the Southern New Hampshire Special Operations Unit for 12 years.  Captain Morrison has undergraduate degrees in Criminal Justice and Social Science, a graduate degree in Justice Studies with a concentration in Terrorism and Homeland Security, and a Juris Doctorate Degree from Massachusetts School of Law.  Captain Morrison has also completed the Leadership Trilogy from the FBI Law Enforcement Executive Development Association (LEEDA).  Captain Morrison oversees the Legal and Professional Standards Division which includes the Prosecution Team, Records Department, and CALEA Accreditation Team.  This division is the most recent Division created to meet the department's goals of policy development and streamlining the Records and Prosecution functions under one division. Serving as the Accreditation Manager, Captain Morrison guided LPD through a successful accreditation process from the Commission on Accreditation for Law Enforcement Agencies (CALEA) in 2021.  Londonderry is one of only 18 CALEA accredited Police Departments in New Hampshire as of 2022.  The maintenance of accreditation status requires constant attention and yearly assessments conducted by CALEA representatives every year.